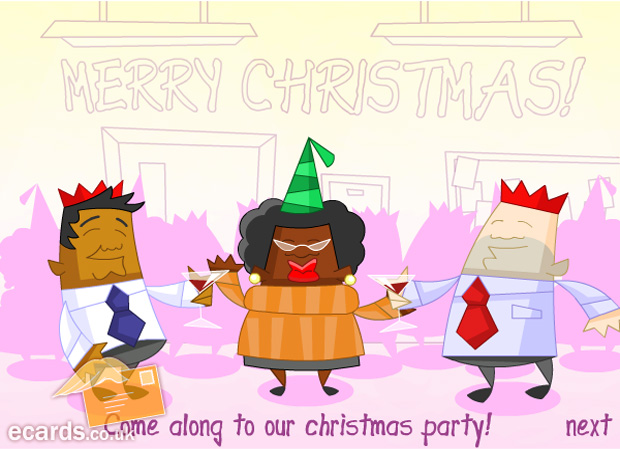 This Christmas Party Invitation starts off with 3 characters dancing all wearing Christmas party hats. The text at the bottom invites the user to come along to our Christmas party. The user is then prompted to click next. There is then a scene of the photocopier room and paper flying out the door - the text says "you may end up having sex on the photocopier" (the user then clicks next). The scene changes to a man who has drunk too much being sick at the bus stop and the text says "or being sick by a bus stop" (the user then clicks next). The final scene just shows a man passing out and the text reads "or you might just make it home". The final screen just says see you there. This is a great work Christmas e-card party invite.

Now this Christmas e-cards is Phat (notice the PH!). It starts off with two…

C U At Xmas

A funny little eCard showig a pair of glasses and two worms. each worm goes…

This funny Christmas eCard is funny and interactive Click santa once: he farts…